Toward the end of the 2010 archery elk season, Jeremiah and I got a day to go hunting with our good friend Keenan. This would be the last day Keenan would be able to hunt, so he wasn't going to be too picky as he had never taken a bull elk with his bow. The morning started out incredibly well and we found ourselves surrounded by bugling bulls waiting for light to break. The first bull we worked in to was a very vocal herd bull, but was only sporting a small six point rack.  This bull had culled a few cows off the main herd, but we chose to pass. The morning looked very promising. As we continued to shadow the main herd we were also able to call in a small raghorn.


The herd had two definite shooters in it, so we stayed with them all the way to their beds. We got to within 30 yards of the largest bull in the thick cover of his bed. Unfortunately he didn't offer an angle for a lethal shot. As we crept around to the side he got up and walked away still without offering Keenan a good shot.

After the long morning we found ourselves almost five miles from the truck! Fortunately we were able to track down Jeremiah's dad and catch a ride back. While eating lunch at camp a nearby bull started screaming! We gave chase and got to within shooting distance of this great bull right behind camp. Just as the bull was to step into our shooting lane the wind swirled and he was off.
We got back to camp and quickly finished our lunch. This had been a great day so far and we were anxious to get back at it. We decided to go to another spot that had lots of bulls screaming just a day before and see if we could find a bull to offer Keenan a quality shot. As we got out of the truck to glass we were greeted with nonstop bugling. The bulls were going crazy, so we pulled out the camera and bow and went to work! Check out the video of Keenan finally getting a shot at his first bull elk! 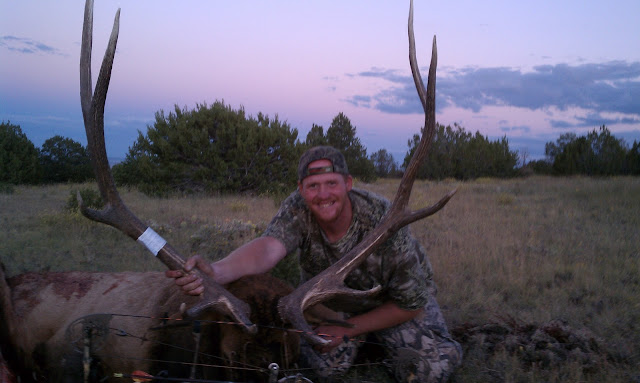 Congrats on your first bull Keenan!
Posted by Sneek Freak TV at 11:21 PM