I spent opening morning of the archery elk season looking at this nice bull with hunter Bill London and cameraman Ben Craft. This was a nice bull, and was very tempting, but we decided not to pursue. We had a long time to hunt and we were determined to shoot a bull over 350" or nothing at all.


We came across this next bull in the evening of the first day. We glassed him across a big steep canyon and thought he looked pretty good, so we decided to go for it and try to get a better look. We pushed ourselves to the limit trying to catch and get in front of this bull. The bull just had too much of a lead on us and it got dark as we were finally able to move in. We took this footage at 80 yards and decided to back out and try him again in the morning. We hunted this area several more times, but never saw the bull again.


This next bull was also very tempting. He had a ton of cows which made it difficult to get very close or tempt him with calls. Once we saw them approaching their bedding area we thought about ambushing the bull, but after spending some time studying him, we decided to back out and keep hunting for something bigger. He is a very cool bull, and if his left side matched his right side on top we would have definitely pursued him.

A couple of days later we were trying a new area and while still dark we heard a lot of bugling. We gave chase and as it began to get light we found ourselves only a hundred yards from a herd of elk with a bull screaming non stop. This bull was very aggressive. As we crept forward, the bull started to move to our left and was going to expose himself, so we got set up, anticipating a shot. We were sorely disappointed when we saw the bull that was making all the noise. He was just an immature six point feeling his oats.


As he walked away we each expressed our disappointment. There were still a few other bulls bugling, so we decided to take a look at them. Not expecting to see anything impressive, we moved toward a bull that was bugling to our left. What a surprise we got when we worked around the tree.


This was a beautiful bull! Not the biggest bull on the mountain, but definitely a looker for someone who had never killed a bull with his bow. Although this bull gave us opportunities to shoot, we chose to just sit back and admire him. It was still relatively early in the hunt, and we were searching for a couple monsters we had scouted before the season began.


After being into the hunt for a while, we decided to go after our third choice bull that we had located from our scouting trips. He was a 7x8 with long beams. We figured he would score in the 360" range. The first evening we went into the bowl we had been seeing the 7x8 in, we found a cool looking bull with some great eyeguards. With nothing else in sight and light fading, we decided to move in for a closer look. Once again we got within bow range of this bull, but Bill was determined to hold out for a bull exceeding the 350 inch mark. 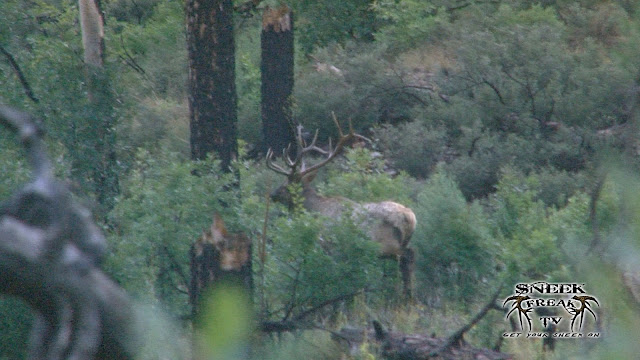 After seeing several borderline bulls, we were finally able to put our eyes on a bull that Bill would shoot! We glassed the bull up with plenty of time to move in before dark. We made a quick half mile hike to the ridge closest to the bull so we could get some footage and make a game plan. As luck would have it, we ran into some other hunters on the ridge who had the same idea as us. Their hunter was already making an approach on the bull from the other side. We examined the situation for a while, and decided to get setup in a potential escape route should the other hunters stalk go wrong. Unfortunately the bull chose another route and we didn't see him the rest of the hunt.

Bill's hunt was an absolute good time! We saw several more bulls and got to share in the success of some of our friends we shared a camp with. Although Bill did not shoot a bull, this is one of my more memorable hunts.
Posted by Sneek Freak TV at 11:55 PM