With the archery hunt winding down, Marcus and I decided to hike into an area we hadn't been to yet this season. I had a trail camera set up in the area, but before the hunt started we still hadn't seen anything that made us want to hunt near the camera. On our hike in we heard a bull bugling and decided to give chase. Before long we were in position and saw a cow walking out toward our opening. We were hopefull a shooter bull would show up behind her. Check out what happened next.


After passing on this bull, we noticed the cow heading over towards another bull that was bugling. There were several bugling, but we decided to follow the cow and check out the bull she was heading to. About 300 yards later we got a glimse of her suitor. He was a cool looking 7x7 that was challenging every bugle he heard. His harom was slowly feeding down a cut that led to a small meadow. As we snuck in closer we realized that there were several satalite bulls hoping to get in on the action, but the big 7 was determined to keep the herd to himself. We finally got as close as we dared at the edge of the timber, and we patiently waited for a shooting opportunity. 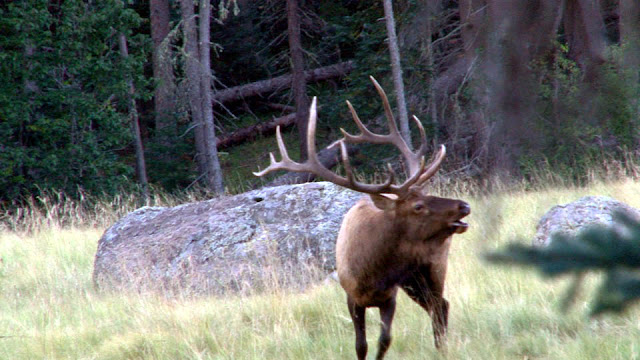