Check out the story and footage of Sneek Freak Broc Brimhall's big Mule deer that he arrowed in New Mexico.

My brother's (Ian and Brett) and myself had archery deer and elk tags
in new Mexico.  Not a great unit but fun nonetheless.  Brett and I had
tagged out on day 2 an 4 with some entertainment bulls ( raghorns), so
we changed our attention to mule deer.  Even though we had hunted
hard up to this point in what use to be great mule deer country, we
went most days w/o seeing a deer.  Regardless, we were going to try.
I killed my elk one evening and we didn't get back to camp until
midnight.  4 o'clock am came awfully early.  We set out for a place
that we use to see lots of bucks 10 years earlier.  We left the truck
a little after daylight still hunting on the edge of a canyon.  We had
gone less than a mile when I saw a flash of movement about 200 yards
ahead.  The binos revealed some bucks feeding in the thick trees.  We
crept about 100 yards further towards there direction of travel when
we notice a buck exit the trees at about 85 yards.  I knew that there
were at least 5 other bucks in the trees that I hadn't got a good look
at but the buck in front of me was definitely good enough.  He was
slowly feeding from left to right.  I ranged him at 72 yards, drew my
bow and took aim as best as my nerves would allow.  After the shot the
buck jumped and started trotting in a loop going back to the other
deer.  I had no idea that I even hit the buck so I was knocking
another arrow so I could launch a hail merry when the deer collapsed.
I was shocked!  This deer was more than I could of asked for on this
hunt.  The arrow had struck the deer in the heart and was found 100
yards beyond where the buck was standing at time of the shot.  Great
hunt with my 2 brothers and cousin and a buck that scored around 175". 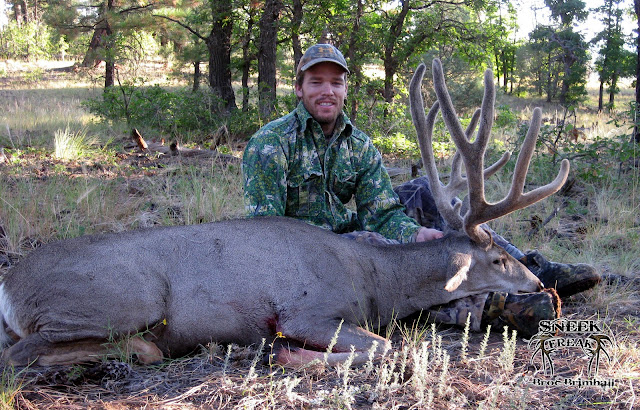