Going up to Utah for the archery deer hunt in August is always a great time to kick off the Fall hunting season. This year was no exception. Opening morning I was hunting with John Wilhelm and we were able to get a little footage of this 4 point.

Unfortunately this buck gave us the slip as we put the stalk on him. Still a great way to start the hunt. Later in the morning we decided we had better practice our stalking techniques, so John put his to the test on this small buck.


John got within bow range, but obviously passed on the shot. The last couple years had been real good to us and we were going to hold out for mature bucks even though we only had a couple days to hunt.

That evening John decided to go sit near a waterhole and try to intercept a buck on his way to get a drink. Another friend of mine, Mike Delgado, had called and was also in UT hunting deer. Mike hasn't tagged a buck with his bow yet, and I agreed to go out with him that evening and try to glass up a shooter. After only about a hour of glassing we got a picture message from John on the cell phone. He had just shot a nice buck! 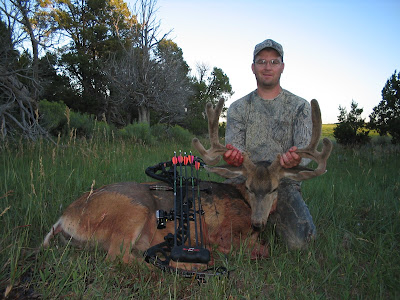 We were stoked to hear the news from John. The glassing had been pretty slow to that point, seeing nothing but does and small bucks. Finally just a little before dark we glassed up a group of bucks a long ways off. They weren't too far from a road, so we decided to jump in the truck and get to where we could see them better and still have time for a stalk if there was a shooter in the group. After getting a better look, Mike decided to try a stalk on a tall four point. The bucks were so preoccupied with feeding that we were able to sneak up to a small oak thicket unnoticed. I got a little video of the buck before Mike shot, but as I put the camera down to range they caught my movement and I was unable to film him shooting the buck. Mike made a great 55 yard shot that put the buck down in about 150 yards. Congrats on your first buck Mike! 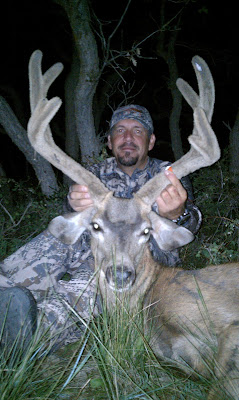 Two bucks down the same evening made for a long night! The next day we found lots of bucks, but were unable to get within bow range of them. The third morning of the hunt I decided to still hunt the area where we saw the four point on opening morning. Once again we found a few small bucks, but no shooters. We worked our way up to a glassing point and right away found a buck bedded down in the oaks. Rather than risk spooking him, I decided to do the stalk alone, without the camera. I finally got to where I could see the bucks horns above the tall grass. As I ranged him he turned and looked my way. I knew it was now or never, so I drew my bow and put to test all the days of target and 3D shooting I had done over the summer. Eighty three yards later﻿ my broadhead found its mark on the bedded buck and he expired less than a hundred yards away. It wasn't until a few days later when we were reviewing footage from the hunt that we realized this was the same buck we had filmed on the first morning. 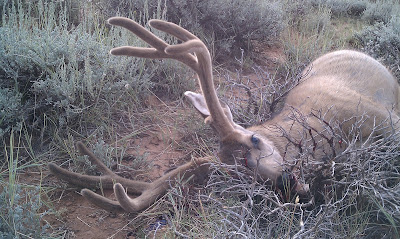 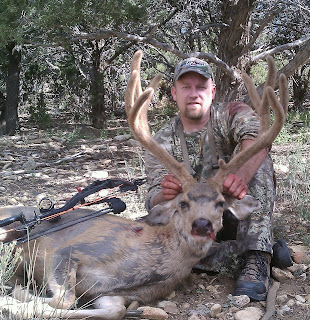 ﻿
Once again Utah had proved to be a great kickoff to our 2010 hunting season! I can't wait for next year!
Posted by Sneek Freak TV at 12:33 AM